Soutenez nos efforts
This is a survival story. I felt it was necessary to share so other parents will know that GBS does not have to result in death or even serious harm.

It was a typical day. Zachary was doing fine. He was a normal baby at 2 pm. Later that afternoon he was unusually fussy. He drank his 5 pm bottle, but he wanted to be held and cried nearly constantly. We fixed him his 8 pm bottle and he wouldn’t eat. By 8:45 pm he started not breathing normally. My husband and I rushed him to the nearest hospital ER. The doctor at the ER quickly realized that he needed more care than this hospital could provide. She told us he would need to be taken by helicopter to a Pediatric ICU. We choose University of Michigan Hospital.

It took the team at the first ER nearly 2-3 hours to get him intubated (a tube down his throat so he could breathe well). The life-flight team was amazing. Once at U of M Motts Children’s hospital, the doctors and nurses there quickly determined he needed a central line and possibly blood transfusions. We signed the consent forms for both. It took till around 4 am for the doctors at Motts to stabilize him. By this time my husband and I were exhausted. We also had Elizabeth, Zachary’s twin sister, with us. We were worried she would get sick, too.

The doctors informed us that night that Zachary may die, but if he lived he would need to be in the hospital for a week or two. We drove home at 5 am to get some sleep, take Elizabeth home, and get packed for an extended hospital stay. While we were at home, the doctors needed to give Zachary two blood transfusions.

By the time we arrived at the hospital the second day, Zachary was connected to three sets of pumps. One set had pain meds, the second sedative, and the third antibiotics and antifungals. By the next morning we were told that the only thing that grew in the blood cultures was Group B Strep. The doctors switched to a more specific antibiotic for GBS. Over the next few days, Zachary got better and they took him off the sedatives and weaned him off the ventilator. We were so happy on day 4 or 5 when we were finally able to hold him again. He was moved from the PICU to a regular room once he didn’t need the ventilator anymore. Here he finished 10 days of IV antibiotics.

I found the Group B Strep International Org while in the hospital and read up on the signs. I printed them out and left them for my family watching Elizabeth while we were in the hospital with Zachary. We have only been home for a few weeks, but Zachary seems like a normal healthy baby boy. He is a little behind his sister because he didn’t get tummy time for those 10 days, but he is catching up quickly. We don’t know if he will have long term effects or not at this time.

Two and a half weeks after Zachary came home his sister, Elizabeth, was crying for about 3 hours straight. We took her temperature; she had a temperature over 101F. We took her to the same ER as we brought Zachary. Her symptoms started at 10 pm at night. By 5 am they gave her the first antibiotics. Although she was crying more than normal, she didn’t have any other signs. We are currently in the hospital where she is being treated for strep. It is most likely Group B Strep.

The signs sheet provided by Group B Strep Org helped me know that 1) she was susceptible because she was a sibling and 2) unusual crying is a symptom. I wouldn’t have known these facts without your organization. 48 hours after the start of this, you would never know Elizabeth is really sick except for the positive strep culture. She didn’t have to exhibit respiratory failure to get treatment. While I don’t know what the long term effects are for either of babies, they are alive and look well.

Pictures below: Upper Left: Zachary Day 2 in Hospital; Upper Right: Earlier in the day the day he got sick; Lower left: Day of discharge from hospital; Lower Right: Day 5 in hospital 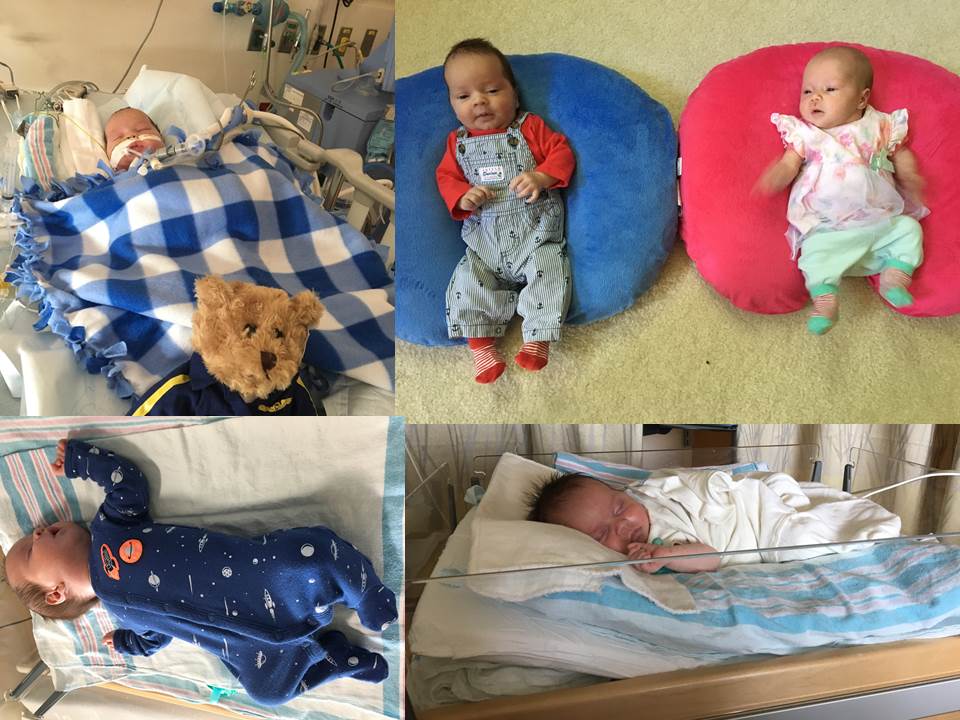 To learn more about How to Help Protect Your Baby from Group B Strep (GBS), click HERE.